Blog - Latest News
You are here: Home / Advice / So I am brand new to the scene. What should I do? What is expected of ... 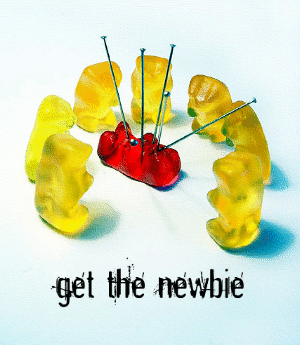 Tip 1: Be honest with yourself

As a group, unless your first party is a high-protocol party, we are very accepting of new people. If you are honest with people regarding your being green and are willing to learn, people are usually very patient, or at least, at most parties, someone is. Don’t hang around people like a forlorn puppy, but be yourself. You should listen in conversations and contribute when you can. Ask questions if you don’t know something. Don’t pretend to be an expert when you are not. Even if you walk into a club pretending to be a bondage master, you’ll soon be found out as a fraud.

It is a very exciting sexual journey you are about to embark upon. However, the journey is just as important as the destination. Don’t jump into a slave contract with the first master who asks (or if you are a Dom, take the first slave you meet who isn’t attached). Take your time and get to know people. Make friends. Your relationships will form naturally. You may start as play partners casually, but then take it to the next level.

This also applies for play as well. Just because in your head you think you will enjoy needles doesn’t mean that you will ACTUALLY enjoy them when you get to do them for example. If you see someone performing a type of play you’d like to try, when their scene is over, ask for a taste. It’s better to find out in casual setting if you like it before committing to a full scene. Take getting tied down, this might take fifteen minutes or so, and then you decide you don’t like bondage, as a top that now has to untie you, I’d be slightly annoyed if I was expecting to do a scene. I’d rather tie you up in a more informal setting and not quite as elaborate before committing to a full-blown scene.

As for as what you SHOULDN’T wear that list is much shorter. I as mentioned previously, dark clothing usually is acceptable in no matter what event you are attending. However, here are a few examples of what not to wear:

Munches – Depending on the munch, there might be different dress codes. For the majority of them though, wearing street clothes is fine. Dark clothing doesn’t matter whatsoever. Just be comfortable. If you’d like to dress up (business casual or formal) feel free, but most munches expect that you don’t come dressed in anything provocative. There are some exceptions such as munches held at private residences and in other countries (I’m speaking from the prudish nature of the United States) but for the majority of them, street is what they expect

Play parties – In all cases, feel free to dress as casual or as sexy as you want. Just make sure that you have a coat, robe or something to throw over it for the walk from the car to the club doors. Except in special circumstances (underground parking comes to mind, but I am not aware of any offhand), the business owner doesn’t want to draw any attention to themselves unnecessarily. Usually, they are on thin ice as is. For example, here in Colorado, one of our clubs was constantly fighting accusations from the city. “They let children in.” “No we don’t!” A court battle and legal fees later we are in the clear. “Someone got raped there” “No they didn’t.” More court battles. As you can see, the last thing the club owner needs is an indecent exposure charge. Cover up for the walk to the club. Once inside you can go nuts within the constraints of the particular party. If it is a private residence, the homeowners might not want their neighbors to know about their kinky hobbies.

Tip 4: It is NOT customary to give gifts or tips

I don’t see this often, but some Doms expect gifts to even consider you for play. Pass on these people. It’s just an excuse to get presents. Now if you give a gift completely on your own merit that’s different. However, if it is a prerequisite, don’t bother with it. If you hired someone, then feel free to tip, but if it is a casual play, money should never exchange hands.

Tip 5: Seek out a mentor or friend

As with anything throughout life, it can be easier if we have someone experienced helping us. BDSM is no exception. Ideally, you might know someone in the scene before attending any kind of event. If not, make friends. You don’t have to play with them, but you can get to know them socially. They might introduce you to others and help you run kinky background checks on potential people to play with. It helps having people you can trust. Keep in mind, these friendships might not develop overnight, but keep at it and your friend group will expand. Attend local munches; you might be surprised and meet someone you already know. If you are the shy sort, at play parties there are usually Dungeon Monitors. These paid employees or volunteers are USUALLY open to talking with you. Feel free to approach them. They are usually identified by red vests, but different parties may have different ways. If the club offered orientation, they usually inform you how to identify a DM.

Just because you are at a play party, doesn’t mean people will be expecting you to play. Watching is perfectly acceptable. Everyone there is playing in public because they want to be seen. So feel free to watch. However, no one will think of you oddly if you don’t play in public. Events are designed to be social affairs with play on the side. In fact, if you don’t want to go in the dungeon, that is fine too. Most venues separate social and play areas.

Tip 7: Keep it in the scene

Now that you are meeting people, keep in mind that not everyone is able to be completely open with their sexual choice. Some of the people might be schoolteachers for example. While they can’t be fired for being kinky, if it became known they were, they might be fired. Especially people who work with children their employers tend to take a better safe than sorry approach. Family is another example. I keep my family in the dark about my activities. If you saw me at the mall, came over to me, and were talking kinky, my sister might be with me and I’d be outted. We don’t want that. So unless you know everyone involved in a group, don’t mention kink.

Have any other tips for newbies? Have a question I missed that you’d like answered? Leave it in the comments below: